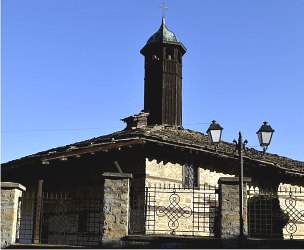 The legend tells that the church was built in XII century. As a sign of gratitude to God for the support during the successful battle in year 1190 at the Tryavna pass, the brothers kings Asenevtsi built three churches dedicated St. Archangel Michael. One of them - in Tryavna. Until now history has not proven this fact. However, during XVIII century the church definitely existed. It was burned during the great kardzhali’s attack of Tryavna in year 1798. In his chronicle, priest Yovcho wrote „we found the church burning like a furnace, but still standing, because it was of kivgir / stone /„. The worship services in it was discontinued for 39 days. Then the people of Tryavna came to themselves, repaired the church and resumed the services.

When building their clock tower in year 1814, the people of Tryavna gathered enough construction material and showed their masters skills as builders. In year 1819 a new church was built in the place of the old one. The decorations of the new temple were made by the woodcarvers and iconographers of the family of Vitan. They decorated it as only they were capable of – with magnificent carvings and icons.

From year 1851 until year 1866 the church emitted its own money among the parishioners, made by the churchwarden Pencho Genyov. They were square and known as cruciform banches because of the the crucifiction drawn on them. At the beginning of year 1853, a high wooden belfry to the church was erected. In year 1862, the big wooden clapper was replaced by a small bell.

In such an appearance the church has remained to the present day. 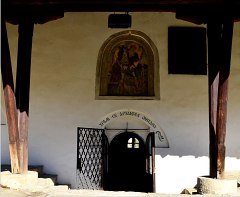