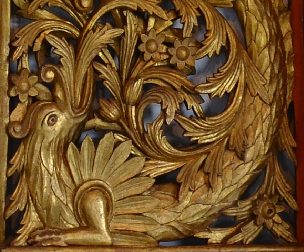 The beginning of woodcarving in Tryavna is unknown. The abundance of wood, the proximity of the samples in medieval Tarnovo facilitated the development of this craft. A legend says how woodcarving began here – a monk called Vikenty from the Athos monastery “Zograf” passed through Tryavna and took with himself a little boy to teach him a craft in the monastery. When the boy came back with the monastic name Vitan, the boy had mastered to perfection woodcarving and iconography. He laid the foundations of the Vitanov family – the biggest family of woodcarvers and iconographers in Tryavna. Wonderful woodcarving was made by generations of masters from the Genchov family from the settlement Genchovtsi as well. The woodcarving as a craft was passed from father to son. The masters skillfully painted on paper the patterns which they intended to carve in wood. The residents from Tryavna preferred floral motives – rose, hollyhock, marigold, vine leaf, as well as the sun as a symbol of the reviving life. Among the twigs and the leaves sometimes peacocks, pigeons, nightingales, even camels appeared. The outlines of what was drawn on paper were transferred to the wood, prepared for carving. The people from Tryavna worked on walnut, linden, alder, pear, oak, poplar. By combining them they sometimes achieved natural play of the wood colors. After that work with chisels with different profiles followed –according to the carved patterns. The carving was either flatter or deeper / cage carving /, in which the Tryavna masters were unsurpassed. The carvers made their tools by themselves with the help of the blacksmiths.

At the beginning of XIX century a carver-mason’s guild with recognized masters was already established in Tryavna. The growing construction of churches in Bulgaria in XIX century lead the people from Tryavna to a lot of places in Bulgaria, where they repeatedly proved their skills in the craft. The masters from the Genchov family from the Tryavna settlement Genchovtsi left wonderful architectural artworks as well, while Vitanovtsi were excellent iconographers.

In the second half of XIX century, with the competition of European goods, the Tryavna carvers were forced to retreat from the Revival traditions in the woodcarving. Their works gradually lost their authenticity.