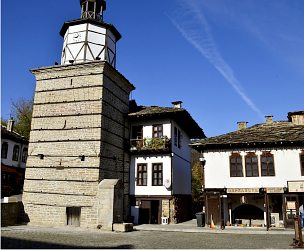 The skills of the Tryavna craftsmen to build wonderful buildings are inextricably related to the development of other two crafts – woodcarving and iconography. In the early years of the development of the Tryavna Art School it was a common practice for the craftsmen to employ themselves with the construction and the interior decoration of the churches. With the increasing demand and orders for construction of churches in the first half of the XIX century, construction, iconography and woodcarving established themselves as different crafts, which did not prevent individual families from combining their skills in any of them. Thus the family of Vitanovtsi were woodcarvers and iconographers. The family of Genchovtsi were excellent builders and carvers. From this family descended the first master Gencho Kanev – ranking master Kolyo Ficheto, who managed to incorporate the Bulgarian building traditions in the European. In ХІХ century, another great master from the Tryavna Building School worked – Dimitar Sergyov, who was the first among the Tryavna builders to be recognized by the Ottoman administration as “architecton”, which means “having the skills of an architect”.

The unimitable appearance of Tryavna is due to its unique architecture, thanks to the generations of masters-builders, who built churches, bridges, schools, who were the creators of the original Tryavna house. Hidden behind a high stone wall in the tumultuous times, or with open shutters of workshops just to the street from the middle of XIX century, the Tryavna houses impress with their architecture. Some of their distinctive traits are: two-floored, with a protruding bay window on the upper floor, white walls with plenty of “arched” windows, beveled outside corner windows. The most memorable Tryavna house is the Daskalovata house – the house with the two sun-carved ceilings, on the building of which master Dimitar Oshanetsa and the apprentice Ivan Bochukovetsa placed a bet. Revival architectural ensambles – Petko R. Slaveykov Str. and Kachaunskata neighborhood – have preserved their authenticity and romance. Among the masterpieces of the Tryavna architectural heritage are the houses, built by Dimitar Sergyov: the Kalincheva house /1830/, the Dobreva house /1834/, the Raykova house /1846/, the Kireva house /1851/. Unique with its urban planning solution is the square ,,Kapitan Dyado Nikola”, which almost completely preserved its authentic XIX century appearance.

The arched stone bridge, built by Dimitar Sergyov in 1844-45 is in harmonious relation with the surrounding architectural environment and with the image of the old Tryavna. Together with the clock tower they contribute to the town’s unique atmosphere. ,,…1814: the Tryavna Clock Tower was built…” – priest Yovcho, the chronicler of Tryavna, recorded. The legend says that in order to obtain permission from the Ottoman authorities for the construction of the tower, the female residents of Tryavna had to give up wearing the traditional head decoration sokay, resembling beautiful royal tiaras. Today the Clock Tower is one of the symbols of Tryavna. At night, after the last peal at 10 p.m., the gentle melody of the old Bulgarian song “Inseparable” with lyrics by Pencho Slaveykov can be heard over the quiet town .

There are plenty of examples of wonderful churches, school and other public buildings, built by Tryavna masters in many settlements in Bulgaria.

After the Liberation of Bulgaria from Ottoman dominance, many of the successors of the former builders went to neighboring countries, to Asia Minor, America, Australia, where they proved with dignity what they had learned from their predecessors.