There are different assumptions about whi were the first Tryavna iconographers - locals or people who came from Samokov, Teteven, Ohrid. Legends connect their dedication to the craft with Athos monasteries – one of the centers of the contemporary religious art. The iconography specimens of the old Bulgarian capital Tarnovo and the proximity to the Arbanassi monasteries are an important factor for the emergence of the Tryavna iconography school. It adopts and makes its own original interpretation of the Byzantine iconography. In more than 500 settlements with Bulgarian population on the territory of the Ottoman empire, there are works of the iconographers from the families of Vitanov, Zahariev, Pop Dimitar Kancho, Minev, Venkov and Minchev. The craftsmen from the Vitan family were very talented iconographers with substantial theological knowledge and advanced technique of iconography. There are more than two centuries laying between the first and the last representatives of this great iconography family – more than 50 painters. The images of the saints they painted are canonical and at the same time imbued with the new Revival spirit – in the look, the air, there is no severity, but wisdom and kindness, vitality and romanticism, certain components of the clothing broke the cannon and are depicted in smooth motions. The iconographers even dared to write their names, as well as the names of the donor on the front of the icon. The other great family of iconographers is the Zahariev family, who represented the school from the earliest to the last years of its development. Besides the vivid colors of the icons, what is specific about them is the auburn contour silhouetting the faces of the saints with warm almond eyes. With surprising skill and economy of the expressive means the iconographers managed to impart the specificity of the individual images and the differences for the particular age.

Tellingly Tryavna with population of 4000 people during XIX century had about 40 iconography workshops in which the whole families were engaged. In their own way and within their capabilities, the iconographers established Tryavna as the earliest and most significant art center of the Bulgarian Revival.

Today we continue to find more and more new places, connected with the creative work of the Revival iconographers from Tryavna. 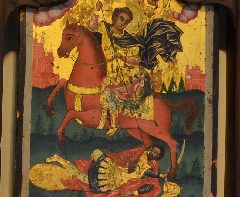